Auditions will be held inside the Kress Theatre lobby, 1101 Third St., Alexandria. Prepared material is not required; our auditions are a read-through with the director; both experienced and inexperienced actors are welcome.

ROLES:
Eric – 30s – 50s, a bit clutzy, anxious/nervous/shy around women
Billie – 20s – 40s, down to earth, speaks her mind
Karen – similar age to Eric, seems ready for a romance
Mayor – 50s to 70s, not the clueless innocent he initially seems, more to him that first appears
Frank – 40s – 60s, a bit older, but not much, than Eric and Karen, having a crisis of conscience
Todd – 40s – 60s, similar age to Frank, stubborn, controlling, likes to do things his way, as much Scottish regalia as possible, with bagpipes
Mary – same age as mayor, seems a bit ditzy until the end of the play, then – !

The script calls for:
·   Some romantic interactions: several stage kisses & embraces between the romantic leads
·   Some wrongly-interpreted struggles on the bed, between several characters
·   Some scenes in some modest underclothing – getting dressed, getting undressed
·   Some physical comedy – to whatever extent possible and safe: flip onto a bed, falling onto a bed, off of a bed, hitting someone with an opening door
·   And lots of fast-paced farcical action, often with doors involved

ABOUT THE SHOW:
COMEDY / FARCE – In a cheap motel room, an embezzling mayor is supposed to meet with his female accountant, while in the room next-door, two undercover cops wait to catch the meeting on videotape. But there’s some confusion as to who’s in which room, who’s being videotaped, who’s taken the money, who’s hired a hit man, and why the accountant keeps taking off her clothes.

Unnecessary Farce will be performed Thursdays through Sundays from March 26th to April 5th on the Hearn Stage at the Kress Theatre.  Thursday through Saturday performances begin at 7:30 PM, and Sunday matinees begin at 2:30 PM.

For more information, please contact us at: cityparkplayers@gmail.com or call 318-484-4478 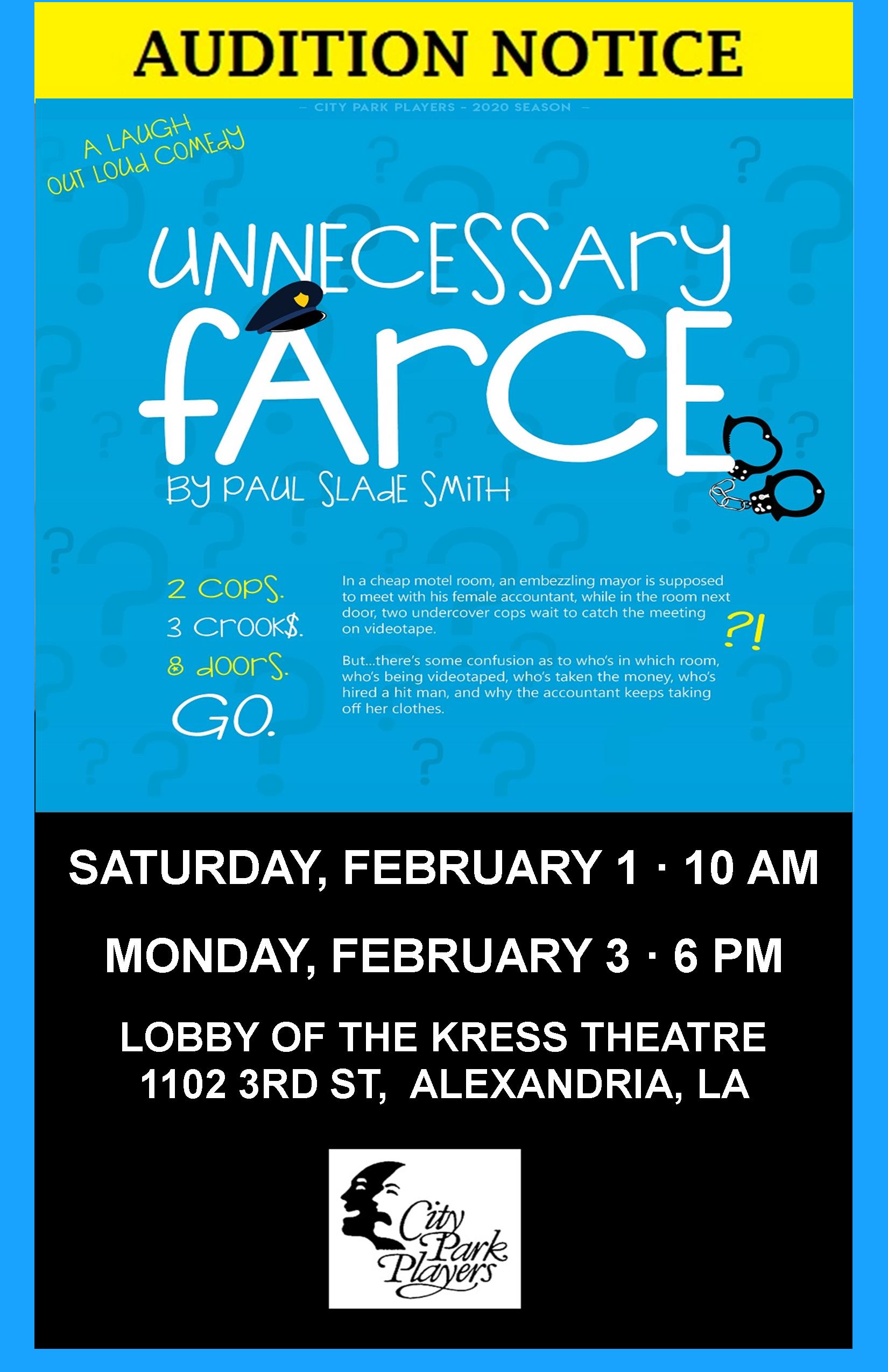